What is slipped disc? 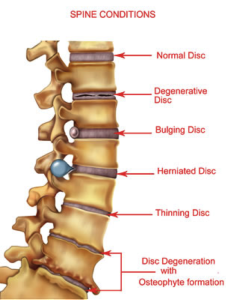 Any disc in the spine can prolapse. However, most prolapsed discs occur in the lumbar part of the spine (lower back). The size of the prolapse can vary. As a rule, the larger the prolapse, the more severe the symptoms are likely to be.

Who gets a slipped disc?

How is it caused?

It is not clear why some people develop a prolapsed disc and not others, even when they do the same job or lift the same sort of objects. It seems that some people may have a weakness in the outer part of the affected disc. Various things may trigger the inner softer part of the disc to prolapse out through the weakened outer part of the disc. For example, sneezing, awkward bending, or heavy lifting in an awkward position may cause some extra pressure on the disc. In people with a weakness in a disc, this may be sufficient to cause a prolapse. Factors that may increase the risk of developing a prolapsed disc include: a job involving lots of lifting, a job involving lots of sitting (especially driving), weight-bearing sports (weight lifting, etc), smoking, obesity, and increasing age (a disc is more likely to develop a weakness with increasing age).

What are the symptoms of a slipped disc?

Back pain: The pain is often severe, and usually comes on suddenly. The pain is usually eased by lying down flat, and is often made worse if you move your back, cough, or sneeze.

Sciatic pain or sciatica: Sciatica is the pain that occurs because a nerve coming from the spinal cord is pressed on (trapped) by a prolapsed disc, or is irritated by the inflammation caused by the prolapsed disc. Although the problem is in the back, you feel pain along the course of the nerve in addition to back pain. Therefore, you may feel pain down a leg to the calf or foot. Sciatic pain can range from mild to severe, but it is often worse than the back pain. With a prolapsed disc, the sciatic nerve is the most commonly affected nerve. The sciatic nerve is a large nerve that is made up from several smaller nerves that come out from the spinal cord in the lower back. It travels deep inside the buttock and down the back of the leg. There is a sciatic nerve for each leg.

Other nerve root symptoms: The irritation or pressure on the nerve next to the spine may also cause pins and needles, numbness or weakness in part of a buttock, leg or foot. The exact site and type of symptoms depend on which nerve is affected.

Cauda equina syndrome: Cauda equina syndrome is a particularly serious type of nerve root problem that can be caused by a prolapsed disc. This is a rare disorder where the nerves at the very bottom of the spinal cord are pressed on. This syndrome can cause low back pain plus: problems with bowel and bladder function (usually unable to pass urine), numbness in the saddle area (around the anus), and weakness in one or both legs. This syndrome needs urgent treatment to preserve the nerves to the bladder and bowel from becoming permanently damaged. See a doctor immediately if you develop these symptoms.

Exercise and keep going: Continue with normal activities as far as possible. This may not be possible at first if the pain is very bad. However, move around as soon as possible, and get back into normal activities as soon as you are able. As a rule, don’t do anything that causes a lot of pain. However, you will have to accept some discomfort when you are trying to keep active.

– Paracetamol is often sufficient if you take it regularly at full strength. For an adult, this is 1000 mg (usually two 500 mg tablets), four times a day.

– Anti-inflammatory painkillers. Some people find that these work better than paracetamol. They include ibuprofen which you can buy at pharmacies or get on prescription. Other types such as diclofenac or naproxen need a prescription. Some people with asthma, high blood pressure, kidney failure, or heart failure may not be able to take anti-inflammatories.

– A stronger painkiller such as codeine is an option if anti-inflammatories do not suit or do not work well. Codeine is often taken in addition to paracetamol. Constipation is a common side-effect from codeine. This may make back pain worse if you need to strain to go to the toilet. To prevent constipation, have lots to drink and eat foods with plenty of fibre.

– A muscle relaxant such as diazepam is sometimes prescribed for a few days if the back muscles become very tense and make the pain worse. 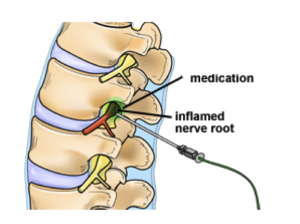 Ozone Discectomy (Ozonucleolysis): Injection of Ozone-Oxygen mixture into the disc is a new alternative method of treating patients suffering from back and leg pain (sciatica) caused by disc prolapse. Large number of international studies confirms the efficacy of this treatment and superiority of this treatment over conventional disc surgery.

Radiofrequency Ablation: Radiofrequency ablation (or RFA) is a procedure used to reduce pain. An electrical current produced by a radio wave is used to heat up a small area of nerve tissue, thereby decreasing pain signals from that specific area. RFA can be used to help patients with chronic (long-lasting) low-back pain. RFA has proven to be a safe and effective way to treat some forms of pain. It also is generally well-tolerated, with very few associated complications

Surgery: The aim of surgery is to cut out the prolapsed part of the disc. This often eases symptoms. However, it does not work in every case. Also, as with all operations, there is a risk from surgery. It is best to get advise from a qualified doctor regarding the pros and cons of a surgery.

At DPMC, we provide the best and latest non- surgical interventions to treat slipped disc