Neuralgia is a stabbing, burning, and often quite severe pain that occurs along a damaged nerve. The damaged nerve may be anywhere in the body, but is most common in the face and neck. The cause of a damaged nerve may be a disease like diabetes (diabetic neuropathy) or multiple sclerosis, an infection like shingles, or the result of old age. Treatment for the pain of neuralgia depends on the cause. 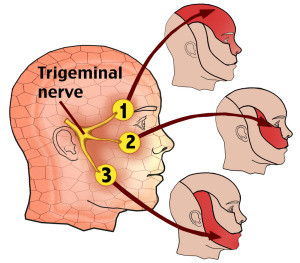 Neuralgia can occur in different parts of the body and can have various causes.

Postherpetic Neuralgia: This type of neuralgia occurs as a complication of shingles and may be anywhere on the body. Shingles is a viral infection characterized by a painful rash and blisters. Neuralgia can erupt wherever the outbreak of shingles occurred and can be mild or severe, persistent or intermittent, and can last for months or years.

Glossopharyngeal Neuralgia: Pain from the glossopharyngeal nerve, which is in the throat, is not very common. This type of neuralgia produces pain in the neck and throat.

The underlying cause of any type of neuralgia is damage to a nerve. Each nerve in your body is protected by a coating called the myelin sheath. When the myelin is damaged or wears away from the nerve, the stabbing, severe, shock-like pain of neuralgia results. There are many different factors, including old age, which can cause damage to the myelin. Unfortunately, in many cases of neuralgia, a cause can never be found.

Infection: The cause of postherpetic neuralgia is shingles, an infection caused by the chickenpox virus. The likelihood of having this infection increases with age. Lyme disease, HIV, and syphilis can also cause neuralgia.

Multiple Sclerosis: Multiple sclerosis (MS) is a disease that is caused by the degradation of myelin. Among the many symptoms that result from MS is neuralgia, often in the face.

Pressure on Nerves: The myelin on nerves can be worn away by pressure. The pressure may come from a bone, ligament, blood vessel, or a tumor that is pressing on the nerve. The pressure of a swollen blood vessel is a common cause in trigeminal neuralgia.

Diabetes (Diabetic Neuropathy): Many people with diabetes will suffer from some type of neuralgia because excess glucose in the bloodstream can lead to myelin damage.

Less Common Causes: If the cause of neuralgia cannot be blamed on an infection, MS, diabetes, or pressure on the nerves, it may be from one of many less common factors. These include:

Medications: Medicines can be used to relieve neuropathic pain. Medications prescribed may include:

Nerve Blocks: Nerve blocks (like trigeminal nerve block) are injections directed at a particular nerve or nerve group that is intended to reduce inflammation and relieve pain

Radiofrequency Ablation: RF ablation is commonly used in trigeminal neuralgia to numb the pain-generating structure and reduce the intensity of pain.